Well the final week of the Autumn term has arrived and with it our Christmas concert.  Despite a tiny technical glitch the children were amazing and showed huge resilience as they continued with the show regardless.  I was incredibly proud of some of the singers, but more than anything all the hard work and dedication Class 4 demonstrated to learn the songs and perform with enthusiasm.

Today we held a school vote to decide who we felt should win the election.  The children in Class 4 began the day by discussing key points from the manifestos, the names and colours of parties as well as the leaders, We also discussed what an MP (member of Parliament) was and that the leader of that party - if elected by the majority vote will become PM (Prime Minister).  Well done Class 4!

This week we retold the story of advent, we linked this to our geography skills and discussed where in the world Bethlehem, Jerusalem and Nazereth are.  We also looked at the route Mary and Joseph may have travelled and the distance.  We looked at the reasons they would take a specific route for example around the mountains rather than over them.  We also looked at images of the Dead Sea and why it may be called it.

As well as this we have designed and made door hangers to sell at the Christmas Fayre.  What a busy week!  Well done Class 4!

Welcome to the wonderful world of explosion! In literacy we finished our non chronological reports about gold, we presented our facts and information using our creative skills in the form of explosion boxes.  Please ask to pop in and see them next time you can .  They are amazing!

A Fountain of Gold - Science

Week 5 - Science - A Fountain of Gold

Fountain of gold
This week we created a fountain of gold as part of our new Alchemy Island topic. First, we poured the hydrogen peroxide through a funnel into the bottle.  Next, we added food colouring and washing up liquid.  Following this, in a separate cup we mixed warm water and yeast.  After 30 seconds we poured the yeast mixture into the hydrogen peroxide mixture.

Thank you to all the grown-ups who joined us today at our parent session.  The children designed a tool an alchemist would use and then designed and made a sensory calm down bottle.  Well done to all who came.

Thank you to all the grown ups who were able to share in our class assembly - once again your continued support is always appreciated and the children adore sharing their learning with you! 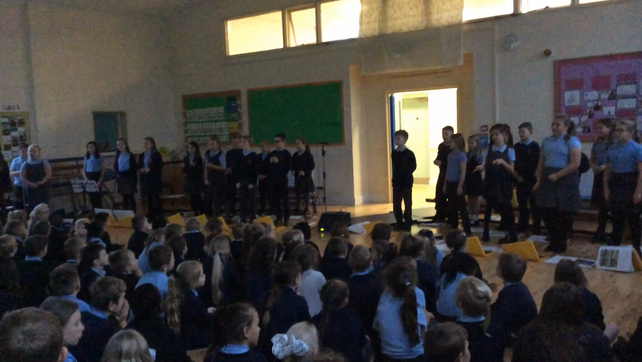 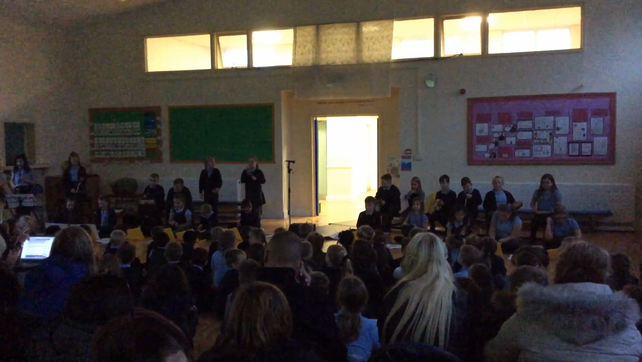 Brilliant visit from Father Declan this week who gave the class valuable insight into baptism.  The children had great fun asking lots of questions and really enjoyed getting to know Father Declan a little bit more.

In mathematics we are continuing to introduce children to concepts, skills and thinking strategies that are essential in everyday life and support their learning across the curriculum. We aim to provide our children with a mastery curriculum which enables them to make sense of the numbers, patterns and shapes they see in the wider world.  In Class 4 we have done this by providing pupils with a deeper understanding of the subject through a concrete, pictorial and abstract approach. We have begun to incorporate small, progressively sequenced steps, whilst promoting the use of high quality manipulatives at all stages.  We continually encourage the development of deep structural knowledge and the ability to make connections between concepts in this way. As a school, we believe that making connections in mathematics deepens pupil’s knowledge of concepts and procedures, ensuring what is learnt is sustained over time by continually revisiting key concepts in different ways will be committed to their long-term memory.  We hope this will enable concepts to be transferred and applied in different contexts. By introducing this approach, we ensure that all children are supported at every stage of their learning.

Class 4 worked incredibly hard looking at circuits as part of their science topic.  We continued to look at playdough as a conductor and the impact of creating different shapes on a circuit.  We found that some shapes worked well with one LED but failed with two, so that is something we will look to investigate further.

Week 2 - History and Geography - mining in the local area.

Today we were fortunate enough to have Mr Goddard (an ex miner and former teacher) visit the class for a talk.  He told stories of mining, discussed seams, how coal was formed, the layers above the coal, the machinery, technical terms such as gates for roads, carts, hydraulics, chucks, cages.  We had a brilliant morning and can't wait to show you the work we produce.

Great start to Autumn 2 this week in which children looked at the features of comic strips and carried out independent research on the Rhinoceros beetle in preparation of making an informative comic strip linked to our Beast Creator topic and novel Beetle boy.

Meanwhile in History we have started our independent local study about mining.  In particularly we looked at what coal is, its uses, and then studied maps of the local area (both google amps and google earth) to identify the Oaks Colliery at Stairfoot, Barnsley.  The children used QR codes to refine their research and have chosen to present the information they learn about it through a double page spread.  Well done Class 4!