The Baptismal font is at the front or West end of the cathedral as that is the entry into Gods church. It has a jar of blessed water that people can bring a special container to take the water away with them so they can bless themselves at home.  The church was originally very small, only seating 200 people and was rebuilt in the grave yard alongside the narrow road.

Mary the mother of God is throughout the cathedral and sits alongside Joseph, looking at Jesus on the cross.

The cathedral was rebuilt after Father Pratt asked the Duke of Norfolk to pay for its rebuild.  The building was completed in 1850 - 169 years ago.  The lighting, toilets, heating, guardian angels are all upgrades of the church.

The church is set out like a cross with the Sanctuary or holy place in the east.  The alter and the Cathedra are also there.  The great east window depicts the story of Mary.

In a church a lily means goodness, a sword sorrow or war and angels with instruments are praising God with music.  A palm branch shows someone who was put to death for their religious beliefs and was a martyr.

In the upstairs chapel resides the Black Madonna and honors the Polish soldiers of WW2.  The statues there are made of marble, whilst downstairs, the statue of the Guardian angel is made of alabastor.

Father Pratt sadly died before the  church was completed and so his remains were secretly moved to a secret crypt beneath the church were he remains today.  A stone dog sits on his memorial to show he died peacefully. 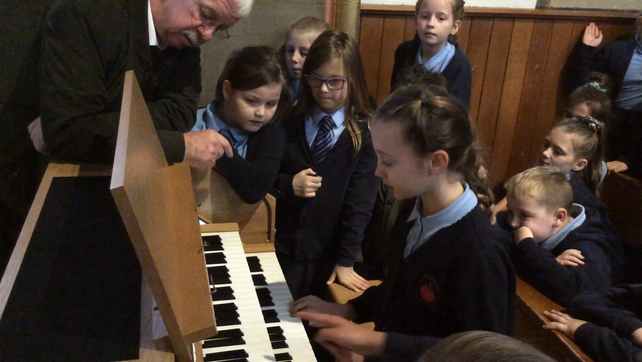