This week we have been preparing for Lent. We performed the Stations of the Cross assembly today telling the story of Jesus' Passion.

This week in Spanish the children have been creating their own menus and to practise applying their vocabulary. We are going to be using these in future to role play scenes from a restaurant giving us chance to order different meals.

This week we finished our work on Anne Frank's Diary by creating our own diary entries in the style of Anne Frank. We imagined life as a Jewish child forced into hiding with their family and created our own diary entry based on this idea. The children created some very emotive pieces and really tried to imagine how Anne and her family might have felt.

This week we began looking at the evacuation of the city children during WW2. We found out about the types of things they would have been allowed to take with them, the kind of experiences they might have had and the reasons behind the need to evacuate.

This week in maths we have been looking at geometry. We have studies and developed our knowledge of missing angles in shapes and have now started looking at nets of 3D shapes. We spent the morning building different nets with some children challenging themselves to build quite complex shapes using the polydron.

We have worked with Mrs Weston this week to create some beautiful art work in pastels. The images we created show a silhouette of a British city during The Blitz of World War 2. We sued coloured pastels and masking tape to create the effect of lights searching in the night sky while fires from the bombs blazed in the background.

This week we have been looking at the events of World War 2 and some of the causes of the war. The children created their own timelines using an online tool to add imagery and detail to their work.

Check out some of the amazing dancing Class 5 have been doing with Ms Kim in our dance lessons. 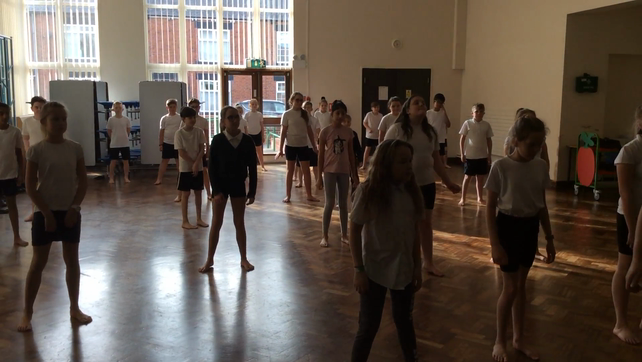